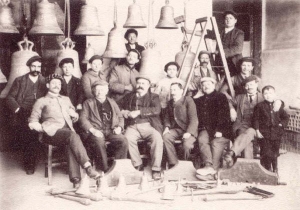 It’s hard to find the inventor of bells and the people who used them first, but it is well know that some people, in particularly in the Eastern Countries, used bells since early times.  In China, for example, bells are reported to be the oldest bronze, and it is known that in India bells were used to gather people to pray or eat together. Bells were also used in the Western Countries; Greece was one of the first country to use bells to announce the opening of food markets.

Initially bells artisan were both monks and lay people and they used wrought iron to make bells. Only later, by mixing copper and tin, people discover that bronze was a better material for bells.

When the use of bells became wide spread, people began to study the proprieties of many kinds of bronze to find the material that best corresponded their needs. The best bronze resulted to be the one that was made in Campania (region of southern Italy) and it seems that the first bell, made following the new standards by S. Paulino, Bishop of the city, did hear its sound in Nola.

Over time, bells have become a symbol of brotherhood, gaining social and religious meanings. The Church began to consider bells as a “res sacrae “, the bridge between Earth and sky, and the people began to feel fear of bells giving them extraordinary power. Following this fear many historical figures, like Saladin, Muhammad and Calvin, decided to forbid the use of bells removing and destroy all the bells that were already in use.

In Italy there are few remaining foundries and among these, the oldest is the one of the brothers Marinelli; in the heart of an Italian region, Molise, there is a town, Agnone, where the art of making bronze bells keeps going as it was a thousand years ago. 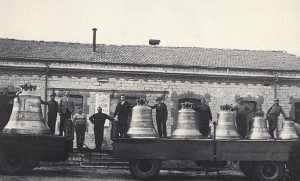 The Pontificia Fonderia Marinelli, is the only foundry, among the many foundries that once were in Agnone, that survived, for eight hundred years and until present day, handing down the ancient art from father to son.

It is likely that large bronze bells were casted in Agnone even before 1200, the sure thing is that, in 1339, Nicodemus Marinelli, called “Campanarus, casted a 2 quintals bell for a Church in the city of Frosinone.

Birth of the Campane Marinelli Foundry 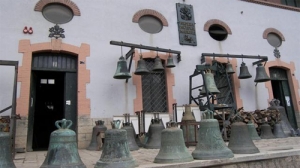 Campane Marinelli foundry has a very long history; the first bell was made around the year one thousand and since then their work has been a long sequence of success and honors. One of the most significant honor that the foundry can boast, is the possibility to use the Papal Arm Coast in their production; it was Pope Pio XI in 1924 to grant that privilege to the foundry.

In the Campane Marinelli history there are also tough moments; during the second world war, for example, the Marinelli Palace was occupied by German troops; they used furniture, tools and important documents to fuel stoves, but also they melted bells to obtain bronze useful in the production of new weapons.

The post war recovery was hard but relatively fast, in the 1949 the foundry was already back to work casting bells for the Montecassino Abbey that was destroyed by bombs.

Unfortunately, in 1950 a new disaster caught Marinelli Foundry; a devastating fire forced them to abandon the old palace and build a new factory but, despite to this, they continued to cast bells for old and new churches.

A new great award came in 1954 when the President of Italian Republic gave to Marinelli Family a Golden medal as coveted reward to the oldest and most loyal, activity in the nation.

Since then, 50 years have passed and the work of Foundrymen Marinelli continues unchanged for both the production technique, which is the same used in Mediaeval times, and the passion as well as expertise that from over 1000 years characterize their work.